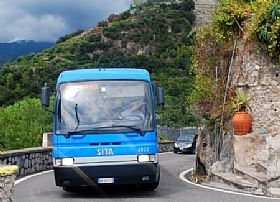 When I was in Vietnam, I thought I had the scariest ride of my life. Our, some what blind and deaf , driver drove at speeds of 60 miles per hour down a pothole ridden highway. Because he was deaf, whenever anyone asked him a question or told him to slow down, he would turn around and stare at us for what seemed like minutes at a time, taking his eyes completely off the road.

I was wrong. The scariest bus ride of my life is taking the SITA bus from Sorrento to Positano along the Amalfi coast. It was like driving in Vietnam, but there is a cliff on one side.

First off — our bus driver was a bit off. He kept walking up and down the bus aisle asking “are you the bus driver?”. I guess he thought it was funny.

When he was driving, and saw an old lady walking her dog across the road, he sped up. He thought it was funny to scare them off the road. When he came close to them, he veered off to one side to dodge them. He laughed about it.

At a small road with on coming traffic, our bus and another bus barely fit through. He opened the windows and yelled at the other bus driver in Italian. The Italians on the bus were laughing, so I assumed he was making a joke or something. He then proceeded to drive through the road, only slowing down to fold in his driver side mirror because it hit the other bus.

I was scared shitless when I realized this driver will be the one driving us down the Amalfi Coast. The best way I can describe the Amalfi highway is — it’s like a one lane highway 1, that serves two lanes of traffic. To signal that you are coming around a blind corner, you honk your horn — Slowing down around a blind corner is optional.

If you ever wondered by Italians are known for cars, I bet it has something to do with the amazing brakes they have on their suicidal buses.

I can not find any accident statistics or reports on Amalfi Coast buses, so I will refrain from making any judgement. But I will admit, I am chicken shit, I was scared as hell.